Rutherford House emerged from discussions in 1981 between The Rev William Still, minister of Gilcomston South Church, Aberdeen and the Rev Dr Sinclair Ferguson, a Church of Scotland minister and well-known theologian.

The vision was to establish a centre for evangelical scholarship, which would seek to engage the Church and the divinity faculties, from a Reformed and evangelical perspective. It was anticipated that the Warden would provide theological and other support to the Crieff Fellowship, also founded by Mr Still.

A base in Edinburgh 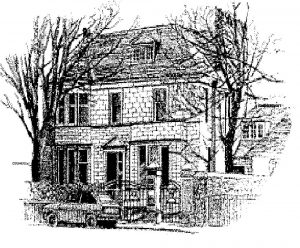 A property was purchased (17 Claremont Park, Leith) and this provided space for the library, as well as overnight accommodation. The original library consisted largely of the books given to Rutherford House by Myrtle Anderson-Smith, the widow of Gordon Anderson-Smith, a fine evangelical scholar who died tragically young after a long illness.

In 1983, Dr Nigel Cameron was appointed the first warden of the House, and he occupied the post for approximately ten years. One significant emphasis during this period was medical ethics, a particular interest of Dr Cameron.

In this early period, the House was involved in publishing books, as well as pamphlets on topics of debate within the Church.

The Rev David Searle became the second warden, continuing the publishing of the House and encouraging those who came to live and study in the House, for short periods of study leave. One significant emphasis during this period was on providing support and encouragement for young ministers, as well as organising conferences and training for ministers, elders, and others.

Mr Searle retired in 2003 and the Rev Dr Bob Fyall became the first ‘Director’ of the House, a post which he held for four years. During Dr Fyall’s tenure, there was a re-emphasis on the House as a centre for evangelical scholarship, engaging with the churches and the theological colleges, from a Reformed and evangelical perspective.

A change of vision

After Dr. Fyall’s departure, the Trustees took the difficult decision to sell the Claremont Park property, yet to move forward by re-thinking the vision and appointing a new Director.

In June 2008, Dr Jason Curtis was appointed and, subsequently, the House leased a new property in Edinburgh’s city centre. During Dr Curtis’ tenure the emphasis was on church revitalisation, using a range of materials.

Dr Curtis also helped to broaden the interest in the House beyond its primary constituency of the Crieff Fellowship and worked with many ministers and churches in independent evangelical churches, as well as those in mainstream churches beyond the bounds of the Church of Scotland. Dr Curtis served for four years.

After Dr Curtis left, the decision was taken not to appoint a new Director immediately. Instead, the Trustees agreed to drive the business of the House forward, each being responsible for one aspect of the work.

The Trustees also agreed on a new mission statement:

‘The purpose of Rutherford House is to help people to think biblically and theologically.’

It was agreed that RH would work primarily with congregations, elders, ministers, and academics, although willing to consider other possible ventures which were appropriate to the mission statement.

The Trustees worked hard to develop the various strands of RH’s ministry and to ensure RH was on a solid financial footing, had offices appropriate to its work and had a clear mission. The Trustees are grateful to God for his leading and guiding through several difficult years until this position was reached.

In 2012, Rutherford House moved to offices within Palmerston Place Church and the search began for a new Director. Initially, this search was unsuccessful, and the position had to be re-advertised.

Finally, in September 2015, Dr David McCaig became Director of the House and served for six months before receiving a call to ministry within the Baptist Church.

We use cookies on our website to give you the most relevant experience by remembering your preferences and repeat visits. By clicking “Accept All”, you consent to the use of ALL the cookies. However, you may visit "Cookie Settings" to provide a controlled consent.
Cookie SettingsAccept All
Manage consent

This website uses cookies to improve your experience while you navigate through the website. Out of these, the cookies that are categorized as necessary are stored on your browser as they are essential for the working of basic functionalities of the website. We also use third-party cookies that help us analyze and understand how you use this website. These cookies will be stored in your browser only with your consent. You also have the option to opt-out of these cookies. But opting out of some of these cookies may affect your browsing experience.
Necessary Always Enabled
Necessary cookies are absolutely essential for the website to function properly. These cookies ensure basic functionalities and security features of the website, anonymously.
Functional
Functional cookies help to perform certain functionalities like sharing the content of the website on social media platforms, collect feedbacks, and other third-party features.
Performance
Performance cookies are used to understand and analyze the key performance indexes of the website which helps in delivering a better user experience for the visitors.
Analytics
Analytical cookies are used to understand how visitors interact with the website. These cookies help provide information on metrics the number of visitors, bounce rate, traffic source, etc.
Advertisement
Advertisement cookies are used to provide visitors with relevant ads and marketing campaigns. These cookies track visitors across websites and collect information to provide customized ads.
Others
Other uncategorized cookies are those that are being analyzed and have not been classified into a category as yet.
SAVE & ACCEPT
Powered by